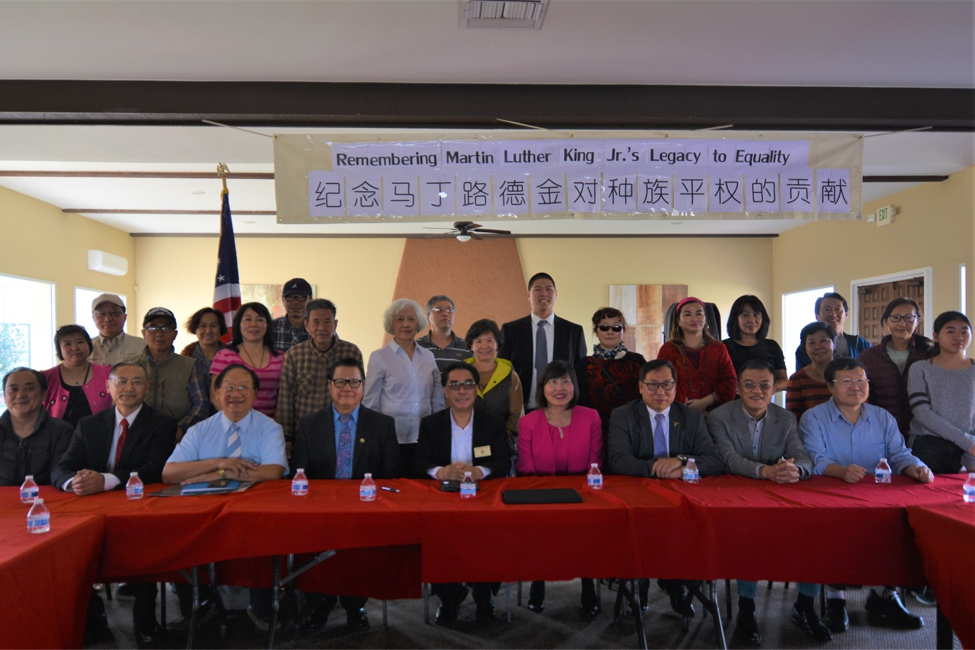 Dr. Martin Luther King was renowned for his leadership during the Civil Rights Movement in the 1950s and 1960s. He insisted on non-violent demonstration for the enfranchisement of every race, which was followed by thousands of African-Americans in front of Capitol Hill. Martin Luther King was awarded the Nobel Prize for Peace in 1964, while unfortunately assassinated on April 4, 1968. His famous legacy was his “I have a dream” speech. Dr. King used his life to pave the way for the human rights of people of color. Thanks to his leadership for the African-American community, a series of legal rules for civil rights were passed, and all the races can join the bar association, vote and purchase houses. Chinese-Americans also benefit from King’s effort that removed the obstacles for us to immigrate to this country.

Attorney Qiang Bjornbak said: “We cannot always expect others to be Dr. Kings and we take advantage of their effort. I hope that more and more “Dr. Kings” will emerge in the Chinese-American community. He also encouraged Chinese-Americans to communicate more with the majority of Americans and cooperate with them. Chinese-Americans should adopt the spirit of Martin Luther King and contribute our effort to this society and be respectable.

Attorney Qiang Bjornbak mentioned that Dr. King’s dream was the equal rights of all human beings, which was partially achieved but there’s still room to improve. Every Chinese-American is writing the history of our community in America. Chinese-Americans face the racial discrimination mainly from the following aspects: bullying from teachers and classmates at schools, biased admission to colleges and work places, and even the legal system treats us unfairly. Avoiding discrimination cannot solve the issue. We must confront these issues. We Chinese-Americans should unite together and protect our interests by counterbalancing the power dividing us based on our different political stances and conflicts of personal interests. We should prioritize the long-term interests of Chinese-Americans above the individual interests.

Mayor Liao experienced a lot of cases of racial discrimination against the Chinese-American community. Since he was elected as the city council member, the city of San Gabriel Valley refused to hold an inauguration for him. Liao sued the city and later on won the Mayor of the city. Mayor Liao mentioned that Asian-Americans have been discriminated for a long time. In 1871, Chinatown of Los Angeles, a group of Whites were about to kill Chinese. One of the Chinese said: “I will give you guys 1000 dollars and my diamond. Please don’t kill us.” Unfortunately, a White person killed him and hung his body up to warn the public. Mayor Liao has witnessed the effort of Chinese-Americans and encouraged Chinese-Americans to contribute to the society for the equal rights of us. Liao also gave the 2018 Calendars of a History of Racial Injustice to the host and the supporting organizations.

Mayor Stephen Lam shared his experience. Some Americans don’t like Chinese leaving their shoes outside of doors. Once his American neighbor threw his shoes into the fish pond. Another time, that neighbor put mud onto his Fengshui mirror. Mayor Lam hoped that all the Chinese-Americans fight together like ten chopsticks, not just one. Lam also mentioned that there were not so many high level positions in the government that occupied by Chinese-Americans, but they successfully pushed the Congress to apologize for the Chinese Exclusion Act in the history. Lam felt appreciated to Chinese-Americans and blessed the residents of the activity room and other Chinese attendees with New Year’s wish.

Chester Chong emphasized love, tolerance, equality and mutual respect. Chairman Chong said, “Only when the whole society is good, people living here can feel happy.” There are a lot of Chinese-Americans in Los Angeles. But in the middle and some other regions, Chinese-Americans are very few and have a hard time and long way to go to protect their rights. He said that people from different races should get along well regardless of our backgrounds. Chong is a senior police officer and community leader who helps Chinese-Americans to adapt to the American society in order to promote the peace and development of the community.

Sister Sunshine was a giver like her nickname when she helped the Chinese-American community. She considered the New Continent as her own hometown. RHEE was a new member of assisting Asians with politics. He shared his opinion of Asians’ participation in politics. He connected Asians together with his ability of Korean language. The Vice-President of MRA Baogang Li showed his appreciation to the guests for their time and effort to encourage the residents of the activity room. Unfortunately, the committee member Chen didn’t show up and give speech due to his another schedule.

The President of the 1441 MRA Ken Meng thanked the attendees for their contribution to the Chinese-American community, which was the foundation of mutual respect and equal status of all the races. Meng said that the members of MRA did a lot of effort on the biased state law of activity room. The room owners faced the threat of revenge. Even some white people didn’t have courage to stand up to fight against the unfair law. MRA organized six large scale hearings with almost 100 attendees to embrace the return of the anti-trust law, RSO, for the sake of the owners of activity rooms. All the owners of activity rooms will benefit from this achievement and there will be less homeless people. The achievement of MRA has built a good image of Chinese-American community that work for the well-being of the American society.

The original article can be found here: http://www.getrealamerica.org/chinese-americans-in-los-angeles-commemorated-martin-luther-king-jr/